Glaucoma; The Silent Thief of Sight 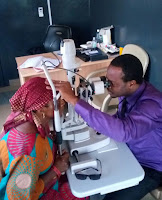 The 12th day of March is internationally recognized as World Glaucoma Day. It is a day set aside to raise awareness and screen people for Glaucoma. In most countries of the world, this annual event is usually carried out as a one week event to ensure wider participation of people.
What is Glaucoma?
Glaucoma has been described in many ways by different ethnic nationalities in Nigeria. Common descriptions include the following;
The Efiks and Ibibios describes it as ‘nnan eyen inwang’ which means ‘blind but eyes are still open’ which further explains that the ‘rope that connects the eye to the brain is dead’.
The Hausas describe it as ‘hawan jinni na Ido’.
The Yorubas refer to it as ‘aisan ifunpa oju’.
Both of these mean hypertension of the eye.
The Igbos describe it as ‘isi anya eke’ which means ‘blindness like that of a python’.
An explanation of the above statement of the Igbos about glaucoma is that ‘the sacred python in spite of white open eyes’ is known not to see well in dim illumination – a picture akin to the normal looking (white) eyes of a patient with primary open angle glaucoma. Some Igbos also describe glaucoma as ‘isi anya oji’, meaning that one is blind but the black of the eye remains black. This is contrary to the description given to Cataract ‘isi anya ọcha’ where the black of the eye becomes whitish.
Whichever descriptions, glaucoma is probably seen by the Nigerian public and indeed in most parts of the world as a disease condition that causes slowly progressive loss of vision which may have apparently normal looking eyeballs and may be associated with increase in the pressure of the eye.
Types of Glaucoma
Primary Glaucoma where there is no ocular or systemic problems that lead to the glaucoma (Commonest form of glaucoma). Can be Open angle (Commoner among people of African and European descent) or Closed angle (Commoner among Asians).
Secondary Glaucoma where there’s an ocular or systemic problem that lead to the glaucoma. Can be Open angle or Closed angle.
How does it present? 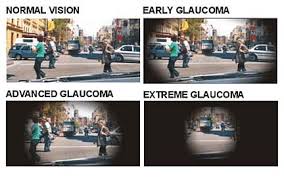 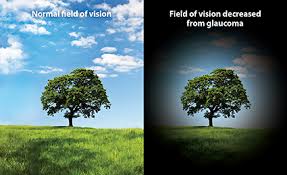 What causes Glaucoma?
The majority of glaucomas may not have obvious cause and referred to as primary while a few of the glaucomas have other diseases that lead to them. There’s apparently a genetic predisposition to the primary glaucomas. Glaucoma is not by witchcraft, not because of sin, and not from the village. Elevated Intraocular Pressure-IOP (eye pressure) remains the most important and so far the only modifiable risk factor.
But a large population of glaucoma patients have normal intraocular pressures.
It might rather be how each eye responds to the intraocular pressure within the same eye. Factors such as vascular dysregulation, obesity, hypertension and its treatment, hypotension, diabetes modify the response of the eye to the IOP. Other risk factors include aging, being black, family history of glaucoma, myopia.
How is Glaucoma Diagnosed?
By examining the Optic Nerve head.
Glaucoma does not mean high IOP. The converse is true also.
Visual field changes consistent with glaucoma may not be evident in early glaucoma.
Most glaucoma diagnosis in the developing world are still opportunistic findings during eye examination for school, employment or for change of glass.
The World Health Organization (WHO) recommends early examination for everyone and subsequently, yearly dilated fundoscopy.
Glaucoma silently ‘steals vision’ before the individual becomes aware.
Vision lost is not gotten back.
How is Glaucoma Treated?
1. With Medications- eye drops, tablets, injections.
2. Surgical or Laser.
3. Any combination of the above.
Lifestyle Modifications
Exercise
Avoiding caffeine
Weight reduction where applicable.
Who should be involved in Glaucoma treatment?
Everyone/General Public. Share the knowledge, community support.
The Government, providing the Eye Care facility, training of Eye care Personnel.
Training Institutions, providing comprehensive qualitative and quantitative training for the Eye care Personnel.
General Physicians
The Patients, most importantly. Constantly using the glaucoma medications daily and actually for life.
Patient relatives and friends, financial, social, emotional support.
Optometrists
Ophthalmic Nurses
Ophthalmologist.
Counselling should be on;
Finally,
One may not stop glaucoma from occurring but one can definitely stop loss of vision from glaucoma. Have an eye check today because every advanced glaucoma today was once an early glaucoma. Take advantage of the on going World Glaucoma Week in your locality.
Feel free to ask questions.
Dr F.U. Anyika
Consultant Ophthalmic Surgeon
Second Post Picture Sourced from: parekheyehospital.com
Third Post Picture Sourced from:  eye-clarity.com
Share :