You May Not Have Known That It Actually Happened 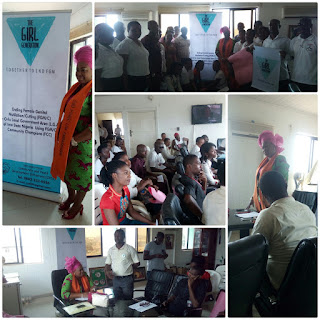 Yesterday was the International Day of Zero Tolerance to Female Genital Mutilation/Cutting (FGM/C), a day set aside by the United Nations to mark the essence of the fight against cutting the genitalia of girls. Though this practice has been
part of the religious or cultural norms of certain people for many years, it has been proven to be one of the leading causes of Reproductive Health Complications and Death among women and girls.
In line with the United Nations goal to put an end to this practice anywhere in the world by 2030, a Non-governmental Organization in Imo State, Nigeria known as Community Youth Development Initiative (CYDI) rolled out series of activities to actualize this goal.
In the month of December 2016, CYDI trained 30 FGM/C Community Champions (FCCs) drawn from 15 communities in Orlu Local Government Area of Imo State, funded by “The Girl Generation” (TGG). These FCCs have been mandated to work with the Community Leaders, Church Leaders, Community Health Centres, Traditional Birth Attendants and all other Organs in the communities to disseminate the message, enforce and monitor the end of FGM in the Local Government Area. 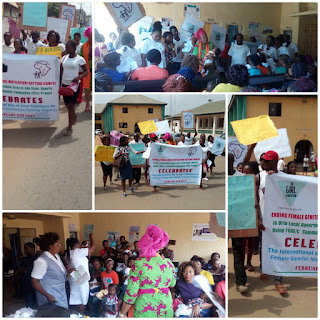 The CYDI team, FCCs, Buchi’s Care Blog and other concerned citizens participated actively in the activities carried out yesterday 6th February 2017 to mark the International Day of Zero Tolerance to Female Genital Mutilation. It started with a courtesy call to the Care Taker Chairman Orlu LGA Imo State Barr. Ijeoma Igboanusi. The message of the courtesy call was presented to her and she welcomed all the participants and expressed her full disposition to the noble course. She gave useful admonitions to the FCCs and pledged the support of the LGA to the entire team on needed areas.
After the Courtesy call, the Care Taker Chairman, joined in the sensitization road walk on the designated roads in Orlu. She accompanied other participants to Orlu Health Centre to convey the message to women and caregivers that came for the immunization of infants. The sensitization walk continued to other areas of Orlu after which the FCCs were encouraged to take the message to the various communities that they represent.
Share :