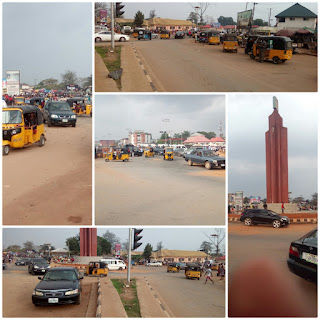 In the early hours of today a young man, lost his life due to road traffic accident at the Imo State University (IMSU) junction, Okigwe road Owerri. The accident happened due to break failure of a truck carrying food items.

Eye witnesses said that the truck lost its break control while it was coming down the hill before IMSU junction. It was also said that the driver continuously blew the horn of the truck to raise alarm that all was not well with his vehicle while he managed to maneuver the roundabout. The distress signal he sent was vividly received by most road users at the junction as both pedestrians and vehicle users made way for the truck to seal through. 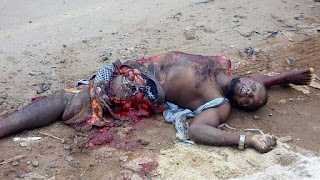 The victim too got the distress signal from the truck and made a move to save himself but unfortunately, that move cost his life. He was in a tricycle a.k.a Keke while the Keke rider made a brief stop to pick intending passengers. Having seen the distress truck which he believed would crush the tricycle he was in; he jumped out of the tricycle but was hit by another tricycle that was also running away from the truck. The impact of the tricycle pushed him further to the middle of the road and before he could gain his balance, the truck ran on him and dragged him along the road before the driver gained control of the vehicle.
Meanwhile, the tricycle that was carrying him and the one that pushed him to the middle of the road narrowly escaped being crushed as the riders did not stop in the face of that situation. The victim had a painful death as he was alive for some minutes before he gave up the ghost. The rapid response medical team came and moved his remains away. As at the time of this report, the identity of the victim has not been ascertained.
For some time now, there has been repeated loss of lives on yearly basis at that IMSU junction. Maybe because the roundabout is located at the end of a hill of which it has been difficult for some drivers to control their speed as they maneuver the roundabout, but ironically there has been some construction work at that junction all these years that seems to have no end.
Share :