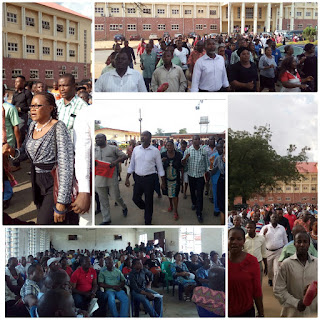 The Joint Health Sector Unions (JOHESU) in Nigeria commenced on “Operation Alligator Bite”, a code name of the indefinite strike throughout the country with effect from midnight of 20th September 2017. JOHESU is the umbrella body for all Health Care Unions excluding NMA and NARD
Having had meetings in the past with the Federal Government of Nigeria (FGN) which did not yield any fruitful or meaningful outcome, JOHESU issued 7 days final ultimatum with effect from 14th September 2017, to FGN within which the lingering issues are to be resolved, failing to do so, members of JOHESU will embark on an indefinite strike action.
Unfortunately, no agreement was reached at the expiration of the ultimatum and the issues are:
1.  Adjustment of CONHESS salary as done for CONMESS since January 2014.
2.  Abolition of scale to scale promotion.
3.Payment of outstanding arrears promotion, skipping and relativity.
4.  Autonomy for Teaching and Specialist Hospitals in the country and other issues.
5.  Implementation of all court judgments.
6.  Review of retirement age from 60-65 years as done for the Tertiary Education Sector.
What are the implications?
·     The Patients cannot assess any health care at the tertiary hospitals without JOHESU.
·   Patients will suffer! Imagine the number of patients who would have to wait until this is resolved.
·      Patients who cannot afford the cost of private hospital could die.
·  The training calendar of Health Professionals on internship and consultancy programs would be altered.
·  Industrial disharmony would continue to brew in the tertiary hospitals since the government would grant the demands of NMA and NARD, but yet to grant similar demands for other Health Professionals since 2012 the negotiations started.
·     It is becoming a norm in Nigeria that workers’ conditions of service cannot be improved unless they go on strike. You can recall recent strikes by ASUU, NARD, NASUU, and currently JOHESU, etc.
Meanwhile, members of JOHESU created the awareness of “Operation Alligator Bite” to the public on Wednesday 20th September, 2017 in a professional manner that they did not clash with other operations going on in the country like Operation Python Dance etc. “ Operation Alligator Bite” connotes that JOHESU will not let go until all her demands are met!
Share :