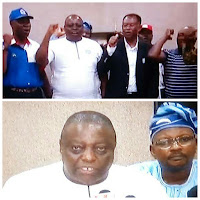 The Joint Health Sector Unions (JOHESU) commenced a nationwide strike on 17th April 2018 involving all the Federal Government Tertiary Health Institutions in Nigeria. The reasons for this strike are the same with the reasons of the previous strike in 2017. Since the commencement of this strike that has lasted for over three weeks and still on, JOHESU has had talks
with the Federal Government of Nigeria (FGN) to implement her demands as agreed on 30th September 2017.
The issues includes:
Since the negotiation with FGN has not yielded any fruitful result, JOHESU has called all her members in States and Local Government hospitals across the country to join in the indefinite nationwide strike. This pronouncement was made by the National Chairman of JOHESU, Comrade Joy Josiah during a press briefing on 9th April 2018 in Abuja.

In another development, President
Muhammadu Buhari in the midst of this
unresolved crisis left the country two days ago for United Kingdom for his medical checkup. In line with these developments, your guess is as good as mine on the level of bitterness brewing in the minds of many Nigerians. Suffice to say, that many Nigerians now appreciate one of the songs of Michael Jackson with a group of children singing the chorus that says “All I wanna say is that they don’t really care about us”.