It happened at the Eastern Heart Land 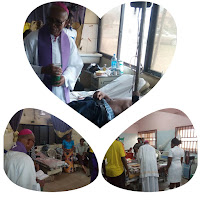 Imo State, South Eastern Nigeria has been on the news for many reasons. On the 28th of February 2018, the people in the state had an experience they will not forget in a hurry.
People who were in pains due to ill health as well as those who were abandoned in the hospital, had reasons to smile. Their joys knew no bounds because the Archbishop of Owerri Catholic Archdiocese, His Grace Anthony J.V. Obinna visited them by their sick beds at Federal Medical Centre Owerri, Imo State.
The visit of the Archbishop was aimed at celebrating the World Day of The Sick, which is usually observed by the Catholic Church on February 11 every year. The Archbishop prayed for the sick, gave them words of encouragement as well as material gifts. 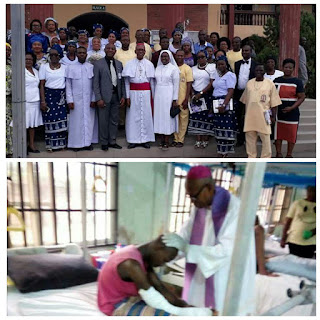 The Archbishop prayed for and interacted with the Management and staff of the Hospital. Indeed His Grace was well received by the Hospital community. This kind gesture of caring for the Sick together with those who work very hard to alleviate the sufferings of the sick, should be emulated by all and sundry.
Share :