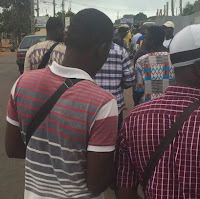 I am a young man known as Fred; I am in my early 30s and the first child of my parents. Before now I believed that the adage that says “problem shared is half solved” is just a deliberate way of exposing one’s self. I kept all my problems to myself because I was confident that no situation would go out of control in my
life. It had always worked for me, but my true life story I am about to share with you proved me wrong.

After my graduation from the University, I left for the city where a cousin of mine is living with her siblings. She accommodated me and after a while I got a job with an establishment. I was in my second month on the job when I fell ill, and she took me to the hospital where I was diagnosed HIV Positive. I believed it was my end and I kept asking myself; why me? Why when I newly got a job? What will people say? But after sessions of counseling, I saw reasons to move on. I was well taken care of in the hospital and I got better.
When I got home after being discharged from the hospital, my cousin told me that I would kindly leave her house in the interest of her siblings (my cousins). I felt bad and was short of words, but there was nothing I could do. I borrowed some money from my colleagues in the office and secured an accommodation where I moved to. I remained very distant from my cousins because of the circumstance that led me out of their house and I did not invite them to my apartment.

After a year,…to be continued. watch out for episode 2