I have been crying because my mother… 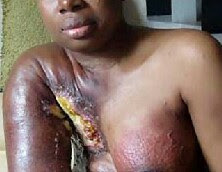 Hello, I want to use this medium to share the true story of my Mum and I with you. I am a 20 year old young lady, and I am still in the university. I am the first of the three children of my parents and the only girl too. My Mum and I
were best friends until everything fell apart. There were no secrets between myself and my mum. That was how I happened to know about her health challenge eight years ago even before my Father knew. That Saturday morning, My Dad had gone out, I entered my Mum’s room and I saw her pressing her chest as if she was looking for something. When I asked, she told me that she was feeling something like a small ball in her breast. However, she stopped her search and attended to me and I left. After a while I asked her if the ball was still in her breast; and she said “yes”, and that it was growing bigger. I asked her if my Dad was aware and she said “no”, but would tell him later in the evening. The next day my Dad took her to the hospital but when they came back, she was not happy. I asked her if the Doctor saw the ball in her breast and she said “yes” but the Doctor said that it was a lump and would be removed through surgery to avert breast cancer. My Dad gave a nod for the surgery to be done, but my Mum objected to it absolutely. After a while the lump grew bigger and started paining her. This development grew her anxiety and she started seeking the opinions of some of her friends that were different from that of the Doctor’s. In fact, she sensed it was spiritual. She said that some persons she suspected were responsible, unarguably; they had projected this ‘attack’ on her. That was how my Mum started moving from one healing centre to the other. Ironically, her healing was out of sight as days, weeks and months rolled by. On the long run, what seemed like a child’s play bore many problems thereby affecting the second breast and other internal organs of her body. It was at this point that my Mum consented to go for surgery and chemotherapy but it was already late. We lost her while she was still taking the chemotherapy.
I have been crying because my mother took her decision out of fear and ignorance. On this 5th year of her demise, I choose to share this in her honor and loving memory to encourage all women to examine their breasts regularly and go for early intervention once anything is noticed.
post picture from vanguardngr.com
Anxiety Attack Breast Cancer Breast lump Chemotherapy Early intervention Fear Ignorance METANOIA Surgery