Before you enter a tricycle (Keke) 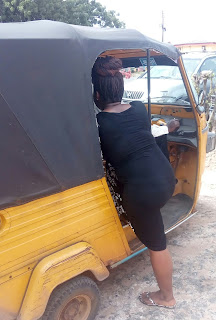 My name is Gift. A few months back, I entered a commercial tricycle (Keke) to go to the market. There was a man already seated in the Keke who I presumed was a passenger. As we were going, the Keke rider told us that he would be taking a diversion through another route to avoid the harassment of the
tax collectors of commercial transporters known as “Agboros”. He wanted to give further explanations; but did not, because, the man seated beside me told him to save his breath but should speed up because he was in a hurry.
The rider diverted to another route, then to a lonely road. I was not scared because I was expecting him to go back to the major road. After advancing for a while, he stopped and it was then that I realized that we were in a bush. It suddenly dawned on me that I was in a big trouble. The man that was sitting next to me brought out a gun and asked me to face down which I did shaking and panting. He searched me thoroughly and collected the money as well as other valuables I had on me; even up to my wristwatch and ear rings. The rider, who was watching out for him, came and slapped me twice. I broke into tears and both of them over powered me and raped me.
After their brutal exercise they abandoned me and rode off. I trekked out of the bush in tears, pains and bruises. When I made it to the major road, a woman who saw me weeping stopped and asked me what the matter was. I told her the ugly story and she took me to the hospital where I was taken care of to prevent infections like HIV, Hepatitis as well as other bacteria and fungi infections.
For a very long time, the whole incident kept playing in my memory like a horror movie. However, I got better after sessions of psycho therapy and I am free from infections having been to medical checkups. I chose to share this on Buchi’s Care Blog to encourage everyone to be security conscious when using the public transport. Raise alarm and alight when you are being taken off your route. Try and memorize the registration numbers on the vehicle you enter. Commit your journey in the hands of God at all times. Visit the hospital immediately after any sexual assault to prevent various infections before going to the police.
Learn from my ugly experience and be very careful. Do not be the next Victim!
Share :

One thought on “Before you enter a tricycle (Keke)”