Another Phase of National JOHESU Agitations 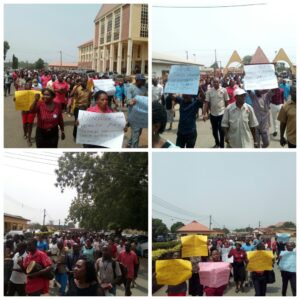 The Joint Health Sector Unions (JOHESU) has once more shown her resolve not to let go her agitations for better conditions of service for her members nationwide. Today, Monday 11th February 2019, the Union commenced a 3 day protest rally in all the 36 states of the country, including the Federal Capital Territory. Within this period, the protest rally will start by 8 am and end by 12 noon, after which members are to return to work.
The Union had engaged the Federal Government of Nigeria (FGN) on several issues which includes;
buthas not gotten any positive outcome.

It should also be recalled that representatives from the Union staged a protest rally at the Federal Ministry of Health Abuja on the 4th of February and the issues have not been addressed.