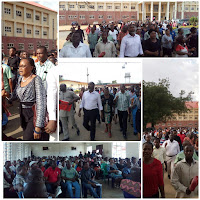 The Joint Health Sector Unions (JOHESU) commenced a nationwide strike today after six months the last was called off. The reasons for this strike are the same with the reasons of the previous strike. According to JOHESU, she suspended the previous
strike due to the agreement reached with the Federal Government of Nigeria(FGN) to implement the demands within five weeks after.
However, after six months the FGN is yet to implement the agreement. The issues are:
JOHESU maintains that this strike was avoidable as she had continued to press her demands after the agreed five weeks through the 21days notice given to FGN on 5thof February 2018. Subsequently, on the 5th of March 2018, another 30 working days ultimatum was issued to the FGN to implement the agreement and avert the nationwide strike.
In another development, the rivalry that has been existing in nation’s health sector showed up its ugly head as the Nigeria Medical Association (NMA) which is the umbrella body of the doctors, is urging the FGN not to yield to the demands of JOHESU. The NMA president Ogirima Mike, during a press briefing on Tuesday, described JOHESU as an illegal association.
What are the implications?
Share :